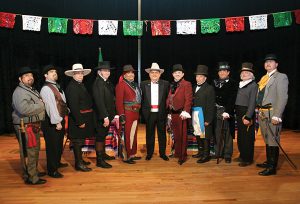 Texas Tejanos – A Revolution Remembered” 1835-1836 is an original playscript written by noted Texas historian Rudi R Rodriguez. The play was created to help identify Tejanos during the 1835-1836 revolutionary period, portray their  backgrounds and define the roles they played in the revolution.

Leading Tejanos like Don Jose Antonio Navarro, Colonel Francisco Ruiz and Colonel Juan Seguin are cast to portray family connections, military and political backgrounds and social status. Others Tejanos, like Torribio Losoya and Gregorio Esparza help to define the common Tejano commitment for a free Tejas and a love of their lands and a future for their families.

Also, leading Texicans like James Bowie, Steven Austin and Colonel William  Travis are portrayed to contrast the two groups of men meeting at the eve of the Texas Revolution at Casa Navarro in Old San Antonio. There, the Texicans will begin to understand about Tejano heritage, their passion for Texas and the will and resources they will commit to the cause of a free Tejas!.

The style of the play is “Chautauqua”, there are ten actors and it is a one act, one scene and forty-five minute production. The cast was drawn from the Alamo Mission and Legacy Association, Alamo Lore and Myth Association and other groups. Costume and set design and creation is by the playwright. The music is taken from the KR Woods “Los Tejanos” CD. Scoring of sound tract was by Albert Richter of Optrix Studios and Rudi R Rodriguez from Texas Tejano.com.