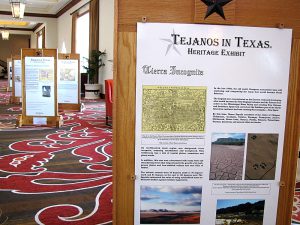 The “Tejano Heritage” Traveling Exhibit is comprised of eight beautifully designed wooden, 36 inch x 84 inch, freestanding panels inserted into a handsome wooden base. Each panel illustrates a 200 year period of Tejano Texas history and its development. All panels will contain historical narrative complimented with original photos, documents, maps and other records to tell about the contributions and accomplishments Tejanos made. The panels can be arranged for small and large spaces.

The Exhibit attempts to provide the viewer with an understanding of the New World in North America in the 1600’s. More specifically, it presents the history and development of Nueva España (today Mexico) and its northern most territory of    Texas in 1690. At the time Nueva España, consists of several states and the unexplored northern provinces of Neuvo Santander ( the current Mexican states of Tamaulipas, New Leon and Coahuila) and the Region de las Philipas (Texas). Through historical maps placed on storyboards we are able to identify the geography of the time.

Secondly, the exhibit provides the names of explorers and missionaries, their dates of expeditions, their maps of travel and their successes. Also, it provides us with an understanding of the size of expedition byway of the number of soldiers, horses, longhorns, sheep and other provisions for the adventure. Additionally, it identifies the first roads, Presidios, towns and wildlife.

Next, through paintings, photos and maps it portrays and identifies the original Villas (towns) in “La Provincia de Tejas” (Texas). Brief descriptions of the role’s and locations are provided on the Missions and Villas on storyboards. Also, the exhibit presents short biographies, photos and paintings on some of the first Tejano military, government, ranching and religious families and individuals during the 18th and 19th century in Texas. Documents and records will also be displayed to help understand the occupations, social and religious lifestyles these Tejanos would have enjoyed and endured on the Texas frontier.

Further, there will be a story with documentation about the military activities on the frontier related to the hostile Indians and wild animals. Also, very importantly the exhibit will highlight a chronology of the many Tejano revolutionary attempts for an independent Texas, prior to the creation of the Republic of Texas in 1836.

Finally, the exhibit will provide the viewer with a synopsis of the many contributions and accomplishments that Tejanos gave to the development and heritage of Texas and its history. It is interesting to note, that for almost one hundred and fifty years, prior to the Republic of Texas Tejanos had created the first roads towns, ranches and governments and laws. It was once said, that the Texas history will never be complete without the story of the Tejanos being told!

Cost of exhibit rental is $2,500 per month plus freight.