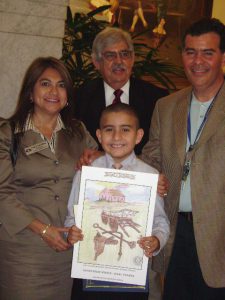 The purpose of our Program of Student Contests is to help bring awareness and education to the true lives and legacies of early Texas Tejano pioneers. Tejanos are the descendants of the first Spanish, Mexican and indigenous families of the Texas frontier. Since 1690, Tejanos were responsible for the first roads, cities, laws and ranches in the Lone Star State.

The goals of the Student Awards Program is provide an additional avenue and incentive for students to read, write and produce academic works about 18th  and 19th Century Tejano Heritage. As a result, we hope we can help elevate and celebrate the roles Tejanos played in the development of Texas.

All contest will have their respective rules and prizes. Judging will be a combination of sponsors, supporters and volunteers. The contest will be promoted and accessible on the internet and newspapers. There will be a special awards ceremony for winners, faculties and families. The contests are available to all Texas students. Download Rules and artwork below.

We believe our student award program we have begun helps to compliment the many other systems of  publications, exhibits and documentaries to help tell the story of the Hispanic experience and Texas.

Rules for the 2013 Coloring Contest are available  below. Contest begins September 1, 2012.