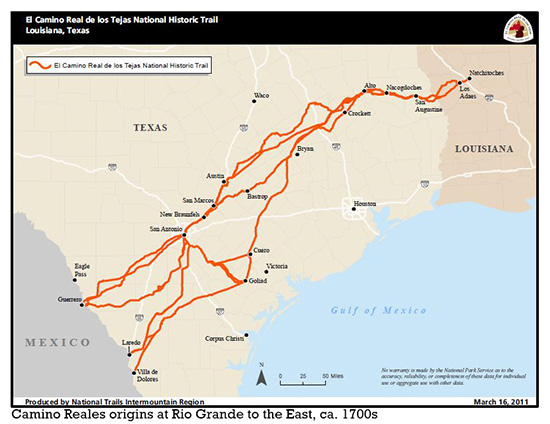 In the late 1680s, New Spain had become alarmed because of French incursions into its northernmost undeveloped territory. As such, it organized its forces and sent them to explore and determine to what extent the French had made inroads. In June of 1690, after several attempts to locate the French, Gen. Alonzo de Leon, the younger, discovered the ruins of Fort La Salle in the Matagorda Bay area. As a result, New Spain issued orders to begin the exploration, colonization, and Christianization of the Native Americans in their new undeveloped area to become known as the Province of Texas.

All of the initial and continued expeditions began at the Presidio del Norte and the San Juan Baptista Mission which was fifteen miles below present-day Eagle Pass Texas on the banks of the Rio Grande River. Nearby, there was a natural ford known as “Paso de La Francia”, French Pass. The ford had a solid rock bottom and only about six inches of water running over it. This shallow river condition allowed both men and horses to cross without problems. All of the New Spain forces would begin their treks here and proceed northeast to the Sabine River and other points north.

The commanders of these first expeditions would recruit their troops from the nearby presidios and receive the bulk of their supplies from Monclova and Saltillo Coahuila. All of their men, horses, and quartermaster supplies would arrive at the presidio to begin their departure. The Franciscan Padres would also come for the journey to the new Province of Tejas. Later, the crossing was referred to as the “gateway” to the new province. Years later, Laredo would replace it as the most well-known crossing.

Although initial journeys discovered Indian and animal trails traversing the current counties of Maverick, Zavalla, Frio, Atascosa, and Medina, the first expeditionary forces numbered around seventy-five mounted cavalrymen, a remuda of 500 hundred horses, a mix of two hundred head of cattle and hogs and the remaining quartermaster supplies and other personnel. This resulted in a long military caravan challenged to move in concert through the wilderness to reach its final destination in the east.

Other historians have reported that there were existing animal and Native American trails in the woods that would have made travel easier for the military mission. I submit that these trails would not have accommodated the large and almost unwieldy expeditions that required sufficient space for transportation of the soldiers, animals, and supplies. At best, the native trails would have signaled a way to water and back to the many wilderness areas the natives occupied. Yet, the military would still need to develop strategic maps of travel to its destinations and back along with tactical means to ford rivers, protect against hostile actions and develop roads to provide transportation for its military missions.

The first leg of the expeditions generally crossed the Nueces and Frio Rivers and arrived at the Medina or the San Antonio Riverbanks as a halfway point to presidios and missions in the east. These rivers had good running water and were teeming with fish. The military developed “Parajes”, stopping points to rest, reconnoiter and reassemble its expeditions. Often, flooding of these rivers caused traffic to move further north or south to enable the fording of the rivers. Also, hostile Native American actions contributed to the roads to move further south to avoid combat.

From the Medina “Paraje” the forces would continue northeast and establish “Parajes” at the Guadalupe, Colorado, Brazos, Trinity, Neches, Angelina, and the Sabine Rivers. The original march was to the new Capital of “Los Adaes” in present-day Robine, Louisiana. From these military efforts, some of the trails would be incorporated and improved for travel and other sections of roads would be constructed for suitable transportation. Major stopping points moving east were San Marcos, Austin, Bastrop, and Nacogdoches. Continued military and civilian use improved the Camino Real emanating from the south to the east.

Adding to the increased development of the Camino Reales network, the roads emanating out of the Villa de Bexar, San Antonio, were the roads to Goliad, San Saba, Laredo, and beyond. These roads initially served the presidios and missions in the north and south to the Gulf of Mexico. All of these roads served to provide transportation for troops and supplies to their final destinations.

Ultimately, San Antonio became the hub to supply the far-off presidios and missions. The city still has many remnants of the “Old Camino Reale”, for example, Laredo street still goes to Laredo, Texas, Nacogdoches Street goes to Nacogdoches, Texas. Goliad and San Saba Streets still lead to the old presidios and missions in Goliad and San Saba, Texas.

The Caminos Reales, King’s Highway, was indeed an important part of the original military mission to explore and protect its borders and ultimately served as a transportation network for colonization of the entire province. The first soldier settlers of the Texas frontier who became known as Tejanos were responsible for the construction, maintenance, and use of the Camino Reales. This contribution to the early development of Texas is an important legacy and heritage of the story of the native Tejanos! Also, this road system contributed to the transportation network of the American Southwest. Viva Tejanos! 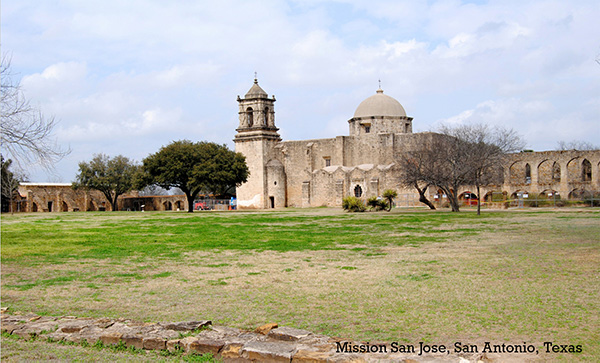 As a result of the founding of Texas by the Spanish in 1690, four distinct areas of development occurred in the province. The first district began at “Los Adaes” in 1717 by Domingo Ramon and was later abandoned in 1719. It was re-established under the direction of the Marques de Aguayo in 1721. The presidio was garrisoned, and the mission was reoccupied near the location of present-day Robeline Louisiana. In 1729, “Los Adaes” was declared the capital of Texas. The town of Nacogdoches was begun by the Tejano families as an outgrowth of the presidio and missions first built along the Sabine River.

Soldier settlers received grants for ranching and homesteading in this area. The friendly Caddo Indians made the development of the district very peaceful. Ranching also led to the creation of an economy based on horses and cattle. The Tejano families who began here continued well into the late 1700s. Yet, in 1772, the capital was removed and some of the missions were transferred to San Antonio. The inhabitants were ordered to San Antonio but did not resettle there, instead, they returned to Nacogdoches to continue their futures.

The second important district was the Bexar District which included San Antonio. San Antonio began in 1719 as a presidio and Mission de Valero. Then in 1731 sixteen families from the Canary Islands arrived to settle in the village and had received royal decrees to establish the first city council along with its first mayor, councilman, secretary, and judges. The first civil government in Texas was established by the Canary Islanders and the soldier-settlers of the presidio in 1733.

More importantly, San Antonio became the hub for the other districts to receive soldiers, quartermaster provisions, and civilian trade. Also, the demand from the civilian communities helped fuel the ranching and farming economy in the San Antonio District.

Further, San Antonio was geographically centered in the middle of the province to receive communications and transportation of men and goods from the south at the Presidio de Norte on the Rio Grande. This presidio was located fifteen miles south of present-day Eagle Pass, Texas, and had long been the gateway to Texas.

Then, in 1772, “Los Adaes” was removed as the capital, and San Antonio was made the new capital. This action further cemented the importance of San Antonio as a political, military, religious, and economic center. By the late 1700s, all roads led from San Antonio to all the other military and civilian centers of influence.  Tejanos who lived here were destined to prosper and enjoy the fruits of their labors as soldiers, ranchers, and merchants and as leaders of their communities.

The third district in Spanish Texas was the “La Bahia de Espiritu Santo” on the Gulf Coast. It was founded in 1747 by Spanish explorer Marques de Aguayo” to help protect the entry of the French by the sea. Later, they constructed a separate mission complex to serve the Native Americans. The early Franciscan Padres faced challenging circumstances as they dealt with both friendly and hostile natives that they hoped to Christianize.

The surrounding fertile lands were ready for ranching and farming activities by the Tejanos. They had come as soldiers and settlers with their extended families to colonize the frontier. Many of the soldiers came from a ranching heritage that was over two hundred years old. Although being trained soldiers, they possessed extreme horsemanship, cattle handling, and thorough ranching experiences to become successful ranchers.

In 1778, it is reported that over 40,000 cattle were branded with very large ranching operations. “Vaqueros”, the Spanish term for “cowmen” would be the very first to rope and break mustangs, round-up longhorns and trail them to market. The Texas cowboy legend has much to be thankful to the “Vaquero” who rode across Texas long before there were any cowboys here.

The fourth district of Texas was “Nuevo Santander” South Texas defined as the “Sierra Mountains” on the west, the Gulf of Mexico on the east, and the “Bay of Espiritu Santo” at the San Antonio River. In 1746, General Jose Escandon was selected by the Viceroy of New Spain to carry out his plan of exploration, colonization, and development of this undeveloped area. This decision was largely based on the discovery of the French Fort La Salle along the Gulf of Mexico. This defensive action would help deter further incursions by the French or the U.S.

He called for a survey of the region by his captains: Blas Maria Falcon, Carlos Cantu, Vasquez Borrego, Francisco Chapa, and Thomas Sanches. Captain Sanchez was deployed to a place founded as Laredo (1755), Falcon to a place called “Carmargo” (1749), Cantu to the founding of “Reynosa” (1749), Chapa was sent to found “Mier” (1753), Vicente Guerrera was sent to “Revilla” (1749).  Then, the general made a call throughout New Spain declaring the availability of land for ranching and settlements. Colonists came from the provinces of Coahuila, Nuevo Leon, San Louis Potosi, and other states of New Spain. Reportedly, over five-thousand pioneers settled in the four districts by 1851.

Typically, the land received by settlers was called an “Entrada” and had frontage on the banks of the “Rio Grande”. Small and large ranches helped create a ranching economy. Some of these ranches were immense enterprises with thousands of mustangs and longhorns. Overall, the four districts succeeded in providing its new Tejanos with land, ranching opportunities, and the promise of a good future. Once again, Tejanos were courageous and self-reliant to prevail in the new frontier and bring about a rewarding future. Viva Tejanos! For more information please visit Texas Tejano.com.