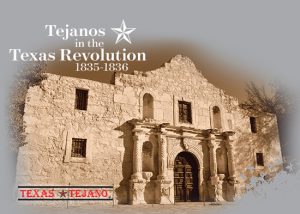 Tejanos in the Texas Revolution

On March 5th and 6th, 2021, Mr. Rudi R. Rodriguez, noted Texas Tejano historian and president of Texas Tejano.com, will travel to the Chisholm Trail Museum located in Cleburne, Texas, just north of Waco, to make a historical presentation on the roles of Tejanos in the 1835-1836 Texas Revolution for the museum's “2nd Annual Texas Independence Day Celebration”.

The “Tejanos in the Texas Revvolution:1835-1836” presentation will focus on the role Tejanos and Tejanas had during the revolution. “Tejanos are descendants of the first Spanish, Mexican and indigenous families on the Texas frontier going back to the 1690s. Little has been written or presented on the lives and legacies of Tejanos and we are committed to telling a fuller story of Texas”, says Rodriguez. The presentation is filled with historical images, maps, and art along with remarks by Mr. Rodriguez. The thirty to forty-five-minute presentation is followed by a lively Q & A session with history posters given away for audience responses. “We are so excited to have Mr. Rodriguez presenting on the Tejanos at The Alamo,” says Carrie Reynolds, Director of the Chisholm Trail Museum.

Mr. Rodriguez is an author, exhibit creator, playwright, and film producer. He has been recognized by the Texas Historical Commission for his statewide contribution to Texas history. Additionally, the national office of The Daughters of the American Revolution has presented him with their “National Medal of Honor” award for preservation of American history. Numerous other awards and recognitions have been accorded to him over the past twenty years. He has also served on the boards of the Texas Historical Commission, Texas Historical Foundation, Institute of Texas Culture and has had service on many other organizations and associations.

About TexasTejano.com: Texas Tejano.com is a firm with its primary objectives of history research, publishing, and communications. The company’s mission is to create awareness and education about the contributions of early Texas Tejano Pioneers and to tell the stories of their lives and legacies. For more information, please visit texastejano.com.