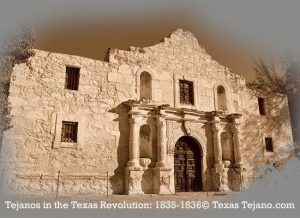 March is Texas History Month and we at Texas Tejano.com would like to take this opportunity to educate and bring awareness about the true lives and legacies of Tejanos and their contributions to the 1835-1836 Texas Revolution. Tejanos are descendants of the first Spanish, Mexican and indigenous families on the Texas frontier. Very little is known about the role they played in the political, economic and military arenas of the revolution for Texas independence.

This brief essay attempts to highlight these efforts with the beginning of 1832 and the Tejanos presenting their “Bexar Memoria”, grievances, to the Mexican federal government. These demands were for more adequate military protection against hostile Indians, more independent government control for Texas and a return to the 1824 Federalist Constitution. These reframe had been voiced since the joining of Coahuila and Texas.

Ultimately, Santa Anna’s dictatorial stance led to the first shots at Gonzales and actions for a revolution to be taken. Then, the Battle of Mission Concepcion led by Texian Cols. James Bowie and Austin occurred. This engagement is also participated in by three Tejano Cavalry Units under Captains Juan Seguin, Placido Benavidez, and Manuel Flores along with almost three hundred Tejanos.

This action is followed by the famous ‘Storming of Bexar,” where men led by old Ben Milam are joined with Captain Juan Seguin’s’ Calvary units numbering almost two hundred men. Together, they capture San Antonio from Mexican General Cos’s Army which numbered over one thousand men. This victory will lead both Texians and Tejanos to begin to fortify the Mission de Valero into “Fortress Alamo.”

On February 28, 1836, General Santa Anna’s Army began the “Siege of the Alamo.” During this time both Texians and Tejanos fought bravely and valiantly. Yet, after thirteen days, all defenders were killed. The Tejano Heroes of the Alamo were: Juan Abamillo, Juan A. Badillo, Carlos Espalier, Gregorio Esparza, Antonio Fuentes, Jose Maria Guerrero, Damacio Jimenez, Toribio Losoya, and Andres Nava. Although there were very few Tejanos lost at the battle, it is reported that one in every six men in the Texas Army of nearly two thousand were Tejanos.

It’s important to note that Tejana mothers, wives, sisters, and about twelve Tejano children entered the Alamo and survived the battle. These brave Tejanas were in support of their men's sacrifice and were able to feed, bandage, and care for the wounded defenders. Some of those “Alamo Heroines” were: Juana Navarro, Gertrudis Navarro, Concepcion Losoya, Juana Losoya, Anna Esparza, Victoriana Salinas, Nicholasa Arocha, Juana Arocha, Maria Arocha, Delores Cervantes, Petra Gonzales, Trinidad Saucedo, and Andrea Villanueva. Heretofore, these Tejanas have been described as “non-combatants” and we submit that in addition to “Heroine” status, they should be acknowledged as “Participants of the Battle.”

Just as important was the role Tejano politicians played at “Washington on the Brazos”. As we all know, this assembly of men was to form the new Republic of Texas, declare its independence and fight for an independent Texas on the field of battle. These men along with Tejanos were elected from all the different districts of Texas.

From the district of “Bexar”, Colonel Francisco Ruiz and Don Jose Antonio Navarro where elected to represent the district. Also, from East Texas, came Don Lorenzo de Zavala; a former Mexican diplomat and vastly experienced constitutionalist. Their role would be significant as they struggled to preserve Tejano rights and their civil rights. Of importance to note is that Navarro and Ruiz were the only two native sons of Texas to sign the Declaration of Texas Independence. Plus, de Zavala was elected the first vice-President of Texas.

Lastly, we wish to focus on the final Battle of San Jacinto that won Texas’s independence. On April 21, 1836, along the bayous of East Texas, General Sam Houston gave the order to attack the Mexican forces led by General Santa Anna. The battle did not last long as the Texians and Tejanos caught the enemy by surprise. Tejano Captain, Juan N. Seguin led a Tejano Calvary unit comprised of all Tejanos, led his men in a final attack that helped demolish the Mexican units. That day, Gen. Santa Anna conceded defeat and proclaimed Texas independence from Mexico.

On a closing note, it is important to understand Tejanos were and are native Texans who have a long heritage and legacy dating back to the early 1700s that built the first roads, towns, ranches, and government. This frontier background has supplied Tejanos a fundamental self- reliance, and independence of character.  Although Tejanos have a bicultural identity, their basic culture has been a sustaining element in the strength of our Texas society today. Viva Texas!

It was once said; Texas history can never be complete without the story of the Tejanos being told! To this end, Texas Tejano continues to research, publish and create exhibits on Tejanos. In the early fall of 2019, we will be offering a more complete edition of the Tejanos of the Texas revolution: 1835-1836, for more information please contact us at www.texastejano.com.