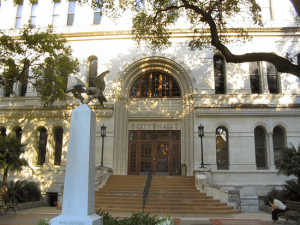 Municipal Initiatives on the Campo Santo

Texas Tejano.com is a fifteen-year-old Texas history research, publishing, and advocacy firm. We're dedicated to championing Tejano legacy and heritage. Our efforts bring awareness and education to the roles that Tejanos played in the development of the American Southwest to students and the public. As advocates, we work with many local, state, and national government bodies to include the history of Tejanos. As such, we are actively involved in resolving issues that affect the heritage of all Texans.

Currently, we’re providing the leadership to create a plan to correct the desecration of the Campo Santo (Holy Land/cemetery). As you may know, Santa Rosa Hospital built over the historical cemetery. Recent expansions have revealed the remains of at least 70 ancestral interred bodies. Early on, the City of San Antonio also built Houston Street and Milam Park over the same holy land.

Our role is that of facilitating and organizing the descendant groups. This enables us to work with hospital and City representatives. We started meeting with City of San Antonio leaders on this issue. At this point, those we’ve met with are in support of the proposed ways in which to commemorate the Campo Santo and preserve the heritage of Tejanos. This includes the Mayor and various Council people. The proposed municipal initiatives include the following:

Texas Tejano.com will continue to work with the City of San Antonio, Santa Rosa Hospital, and descendant’s groups to help correct this issue. If you have any questions, please visit texastejano.com or call us at (210) 673-3584.