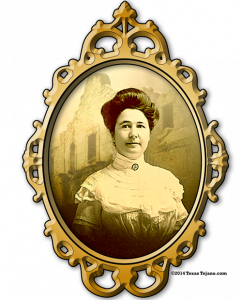 On Wednesday June 11, 2014 at 11:00am,The Menger Hotel will be placing a plaque honoring preservationist and historian Adina DeZavala. It will be unveiled in the original lobby of the Historic Menger Hotel (204 Alamo Plaza, San Antonio, TX 78205). TexasTejano.com is pleased to support this event. The plaque honors Ms. DeZavala’s involvement in the struggle to save the long barracks structure at the Alamo. Her actions inspired a historical preservation effort across the United States.

While residing at the Menger Hotel she worked with another Texas native named Clara Driscoll to restore the Alamo to its former glory.

Background: During a visit to San Antonio, she was shocked to see that the Alamo had been vandalized and neglected. It was in 1908, when upon learning of developers plans to destroy the long barracks and in its place construct a high rise hotel, Ms. DeZavala barricaded herself inside the Alamo for several days to prevent this from happening. Going without food or water her actions earned her national attention and ultimately led to the preservation of the Alamo’s long barracks as it stands today. Adina DeZavala was an early heroine in the national movement to save historic American landmarks. For more information, please contact Mr. Ernesto Malacara at the Menger Hotel at (210) 223-4361.