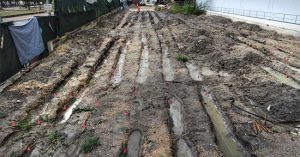 Texas Tejano.com is a fifteen-year-old research, publishing, marketing, and advocacy firm dedicated to championing Tejano legacy and heritage. All our efforts have been to contribute to the awareness and education of students and the public to the true story of the lives and roles that Tejanos played in the development of our state and the American Southwest. Further, our advocacy efforts have led to working with many local, state, and national government bodies to include the untold story of Tejanos.

Along with the leadership group consisting of Los Bexarenos, American Indians in Texas at the Spanish Colonial Missions, the Canary Islands Descendants Association, and others, we’re currently involved in an effort to properly commemorate the desecrated Campo Santo Cemetery. As you may know, Santa Rosa Hospital was built over the historical cemetery, and recent expansion has revealed the remains of at least 70 ancestral interred bodies. In addition, early on, the City of San Antonio built streets and a public park over the same holy land.

As a result, we’ve proposed three things be done: 1) Produce an overall Campo Santo Historical report, 2) Produce Cultural & Historical Commemoration including monuments and markers, 3) Propose the creation of a committee, produce a city ordinance and state legislation to protect historical cemetery sites in the future.

As we approach the 300-year anniversary of the founding of San Antonio, it’s important that we preserve this significant World Tejano Heritage Site that is a part of our history and celebrates the memory of all those who contributed to the development of our city. For more information or to participate, please contact Mr. Vincent Tavera or me at (210) 673-3584.

Express News article on the Campo Santo by Rudi Rodriguez

Maps of the Campo Santo and Santa Rosa Hospital