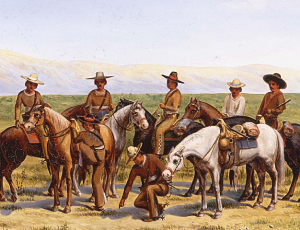 ZAMBRANO, JUAN JOSÉ MANUEL VICENTE (1772–1824). Juan José Manuel Vicente Zambrano, lieutenant colonel and subdeacon of San Fernando de Béxar, was born on April 4, 1772, in San Fernando de Béxar to Joseph Macario Zambrano and Juana de Oconitrillo. In September 1793 he received his minor orders and the title of subdeacon by the bishop of Monterrey. By 1803 he was the subdeacon in San Fernando; that year he requested the governor to grant him property along the irrigation ditch belonging to Mission Concepción to establish a flour mill. In 1807 Zambrano was ordered to leave San Fernando by Com. Gen. Nemesio Salcedo for licentious behavior. The order was suspended, and Zambrano was still there in December 1809, when he granted power of attorney to his brother, José María Zambrano. He later left Béxar but was back from Guadalajara before the end of 1810. During the Casas Revolt, Zambrano retired to his ranch some miles out of San Fernando, where he kept himself informed on events in the villa. On the evening of March 1, 1811, ten men gathered in Zambrano's home and proceeded to town where they captured the garrison by convincing the military to support their cause. Early on March 2 the group elected a twelve-member governing junta, which represented both the military and the general populace. Zambrano was elected president. Each member of the junta took an oath to religion, the king, and the country. At dawn Casas surrendered to 400 troops. He was sent to Monclova for trial, convicted, and executed.