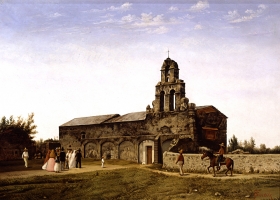 AMBRANO, JOSÉ DARÍO (1768–1826). José Darío Zambrano (Sambrano), priest, was born in San Antonio on December 17, 1768, the son of Joseph Macario Zambrano and Juana de Oconitrillo. His father was a recent immigrant from Saltillo, Coahuila, who soon became a prominent rancher. Among Darío’s numerous brothers and sisters was his younger brother Juan Manuel Zambrano, with whom Darío has often been confused. As a young man Darío was sent to the interior of New Spain to study for the priesthood and was ordained in Monterrey in May 1793. Little is known about where he ministered between then and 1811, except for a few months service as substitute pastor of Matamoros in 1800 and his time as pastor of Santa Rosa, Coahuila, in 1807–08. Zambrano was in San Antonio when the Casas Revolt broke out in early 1811, and he joined in the Royalist counterrevolution led by his brother Juan Manuel Zambrano.