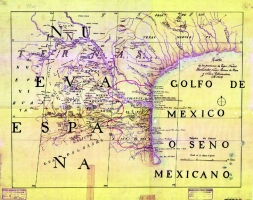 ZALDÍVAR, VICENTE DE (ca. 1573–?). Vicente de Zaldívar, the younger, Spanish explorer and soldier, was probably born in Zacatecas, a mining town on the frontier of northern Mexico, about 1573. He and Juan de Zaldívar were sons of Vicente de Zaldívar, the elder, and Magdalena de Mendoza y Salazar. Through a series of marriages, the Zaldívar and Oñate families of Zacatecas had become so intricately related that Juan de Oñate, the future colonizer of New Mexico, was both uncle and second cousin to the Zaldívar brothers, and he later became the father-in-law of Vicente. In September 1595 Juan de Oñate received a royal contract to colonize New Mexico, and he began immediately to recruit officers and men. He enlisted his young kinsmen in his command. Vicente de Zaldívar received the position of sargento mayor, a rank below that of his brother, Juan. Through no fault of Oñate’s, final approval of his contract by the king’s agent did not come until early 1598. The expedition’s point of departure was the frontier town of Santa Bárbara, situated near the headwaters of the Río Conchos in southern Chihuahua. On previous occasions Spaniards en route to New Mexico had followed the Conchos to its confluence with the Rio Grande and then proceeded upstream along the course of the larger river to the province. This circuitous route had the advantage of ample water along the way. But Oñate, made impatient by delays, sought a shortcut and ordered a reconnaissance to that end by Vicente de Zaldívar. Zaldívar, at the head of a small party, spent nearly a month in the field, but he returned with knowledge of a more direct route, which afforded some water, through formidable sand dunes. Following the new trail blazed by Zaldívar, the full expedition reached “El Paso,” the ford in the Rio Grande, on May 4, 1598. It then continued along the course of the river to New Mexico.