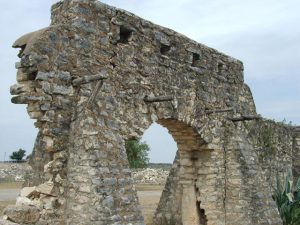 In the early 1800’s the Spanish crown authorized one of its last presidios and missions to be built along the San Saba River in present day San Saba County Texas. After repeated attacks from the hostile Indians, the Fort was order closed and the military was re-deployed to San Antonio in 1833. The last command was under Colonel Francisco Ruiz, who later became a signer of the Texas Declaration of Independence.