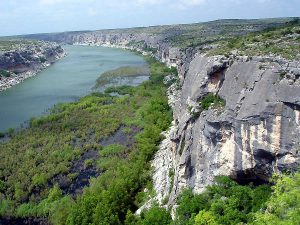 PECOS RIVER. The Pecos River, one of the major tributaries of the Rio Grande, rises on the western slope of the Santa Fe mountain range in Mora County, New Mexico (at 35°59' N, 105°33' W), and runs south through San Miguel, Guadalupe, De Baca, Chaves, and Eddy counties in New Mexico before it enters Texas just east of the 104th meridian. In Texas the river flows southeast, forming the boundary between Loving and Reeves, Reeves and Ward, Ward and Pecos, Pecos and Crane, Pecos and Crockett, and Crockett and Terrell counties. It then enters Val Verde County at its northwestern corner and angles across that county to its mouth (at 29°42' N, 101°22' W) on the Rio Grande in the Amistad Reservoir, between Comstock and Langtry some thirty-eight miles northwest of Del Rio. Through most of its more than 900-mile-long course, the Pecos River parallels the Rio Grande. The total drainage area of the Pecos in New Mexico and Texas is about 44,000 square miles. Most of its tributaries flow from the west; these include the Gallinas River, the Rio Hondo, the Rio Felix, the Rio Penasco, the Delaware River, Toyah Creek, and Comanche Creek. Entering the Pecos from the east are the tributaries Alamogordo, Taiban, Live Oak, and Howard. The topography of the river valley ranges from mountain pastures in the north, with an elevation of more than 13,000 feet above sea level, to grasslands, semiarid irrigated farmlands, desert with sparse vegetation, and, in the lowermost reaches of the river, deep canyons. The principal cities along the river in New Mexico are Santa Rosa, Fort Sumner, Roswell, Artesia, and Carlsbad; in Texas, the main city on the river is Pecos, the Reeves county seat. In the early 1990s none of these places had a population of more than 40,000. Oil is produced in the eastern portion of the Pecos river valley, part of the Permian basin, and sulfur and potash are also important products.