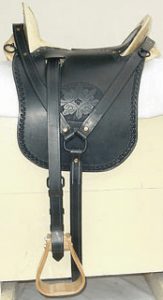 The McClellan saddle was a riding saddle designed by George B. McClellan, a career Army officer in the U.S. Army, after his tour of Europe as the member of a military commission charged with studying the latest developments in engineer and cavalry forces including field equipment. Based on his observations, McClellan proposed a design that was adopted by the Army in 1859. The McClellan saddle was a success and continued in use in various forms until the US Army's last horse cavalry and horse artillery was dismounted in World War II. Today, the McClellan saddle is used by ceremonial mounted units in the US Army. The saddle was used by several other nations, including Rhodesia and Mexico, and to a degree by the British in the Boer War.