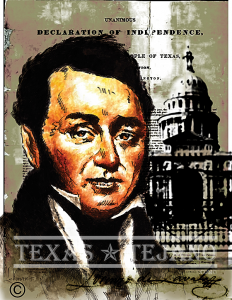 Manuel Lorenzo Justiniano de Zavala y Sáenz, first vice president of the Republic of Texas, the fifth of nine children of Anastasio de Zavala y Velázquez and María Bárbara Sáenz y Castro, was born in the village of Tecoh near Mérida, Yucatán, on October 3, 1788. After graduating from the Tridentine Seminary of San Ildefonso in Mérida in 1807, he founded and edited several newspapers in which he expressed those democratic ideas that were to be the hallmark of his political career, ideas which he continued to advocate while serving as secretary of the city council of Mérida from 1812 until 1814. His support of democratic reforms led to his imprisonment in 1814 in the fortress of San Juan de Ulloa in the harbor of Veracruz, where he gained enough knowledge from reading medical textbooks to qualify him to practice medicine upon his release from prison in 1817. He also taught himself to read English during his imprisonment. After serving as secretary of the provincial assembly of Yucatán in 1820, Zavala went to Madrid in 1821 as a deputy to the Spanish Cortes. Upon his return to Mexico, he joined the leaders of the new nation in establishing a republican government. From 1822 until his death, he was one of the nation’s most active political leaders, representing Yucatán as a deputy in the First and Second Mexican Constituent congresses of 1822 and 1824 and in the Mexican Senate from 1824 to 1826. In the following two years, marked by the internecine struggle between the Federalists and Centralists for control over both national and state governments, Zavala served intermittently as governor of the state of Mexico. When Vicente Ramón Guerrero became president, Zavala was appointed secretary of the treasury and served from April to October 1829. When the Centralist party, led by Vice President Anastacio Bustamante, ousted Guerrero late in the year, Zavala, a strong Federalist, was forced to abandon politics and, after a period of house arrest, to go into exile in June 1830.