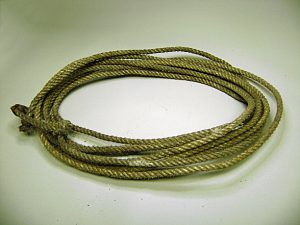 The Riata was a well-known tool of the Tejano vaquero on the Texas frontier as it was used to control longhorns and mustangs.

A lariat is made from stiff rope so that the noose stays open when the lasso is thrown. It also allows the cowboy to easily open up the noose from horseback to release the cattle because the rope is stiff enough to be pushed a little. A high quality lasso is weighted for better handling. The lariat has a small reinforced loop at one end, called a Honda or Hondo, through which the rope passes to form a loop. The Honda can be formed by a Honda knot (or another loop knot), an eye splice, a seizing, rawhide, or a metal ring. The other end is sometimes tied simply in a small, tight, overhand knot to prevent fraying. The reata is made of braided (or less commonly, twisted) rawhide and is made in lengths from 50' to over 100'. Mexican maguey (agave) and cotton ropes are also used in the longer lengths.


It is also still used on working ranches to capture cattle or other livestock when necessary. After catching the cattle, the lariat can be tied or wrapped (dallied) around the horn, a typical feature on the front of a western saddle. With the lariat around the horn, the cowboy can use his horse as the equivalent of a tow truck with a winch.


Part of the historical culture of both the vaqueros of Texas and the cowboys of the Western United States is a related skill now called “trick roping”, a performance of assorted lasso spinning tricks.