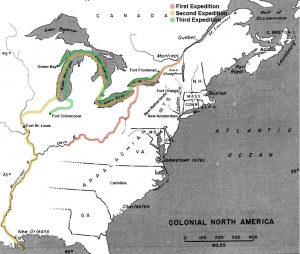 LA SALLE EXPEDITION. René Robert Cavelier, Sieur de La Salle, sailed from Rochefort, France, on August 1, 1684, to seek the mouth of the Mississippi River by sea. This new voyage of four ships and more than 300 persons at the start was a follow-up to La Salle's 1682 exploration of the Mississippi from the mouth of the Illinois River to the Gulf of Mexico. Having first departed from La Rochelle on July 24, the fleet was forced to make port at Rochefort for repairs to the Royal Navy escort vessel Joly. With Spain and France at war, La Salle planned to establish a colony sixty leagues up the river as a base for striking Mexico, afflicting Spanish shipping, and blocking English expansion, while providing a warmwater port for the Mississippi valley fur trade. He planned to settle near the Taensa Indians, whose villages lined Lake St. Joseph in Tensas Parish, Louisiana. The war with Spain ended two weeks after La Salle sailed. The word did not overtake him during his pause at Petit Goâve (Haiti), and he proceeded into the Gulf—historically an exclusively Spanish sea—believing that the war was still on.