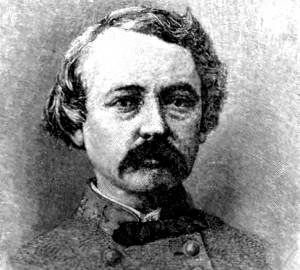 W. H. C. Whiting, military officer, son of Levi and Mary A. Whiting, was born in Biloxi, Mississippi, on March 22, 1824. At the time of his birth his father was a captain in the First Artillery, United States Army. Whiting was an academic genius who entered Boston English High School, the nation's first public high school, at age twelve. He graduated as the valedictorian two years later and entered Georgetown College (later Georgetown University), graduating second in his class at age sixteen.

He entered the United States Military Academy in 1841 and graduated at the head of his class on July 1, 1845. His grade average was the highest of any previous student at West Point, where he was first in every subject all four years. Upon graduation Whiting was commissioned Second Lieutenant, Corps of Engineers, and assigned duty as assistant engineer at Pensacola, Florida. There he helped supervise repairs and improvements at military installations in the area until 1848, when he was assigned duty in Texas to scout a wagon road between San Antonio and El Paso. That partially successful expedition came to be known as the Whiting and Smith expedition, which located what would become the southern commercial and military route between the two cities.

He then surveyed the frontier forts of Texas, submitting his report January 21, 1850. During the 1850s Whiting was involved in engineering projects in California, Texas, North Carolina, South Carolina, Georgia, and Florida. One of his projects in Texas appears to have been the clearing of the Colorado River raft. In his report of December 9, 1852, to the Corps of Engineers in Washington, he reported favorably on the work already done by the Colorado Navigation Company. He recommended a plan of action that was adopted by the Secretary of War. In April 1857 he married Kate Walker, the daughter of Maj. John Walker. His last two army assignments were at Fort Pulaski, Georgia, and Fort Clinch, Florida. At the outbreak of the Civil War, Whiting resigned from the United States army on February 20, 1861, and joined the Confederate army; he was considered one of the most capable of Confederate engineers. By July 1861 he was a brigadier general commanding two brigades, one of which was Hood's Texas Brigade. During the battles around Richmond, Whiting was a major general and was suffering from chronic fatigue. He asked for and received a medical furlough. In 1864 he was at Cape Fear, near Petersburg and Drewry Bluff. He was wounded in the leg at Fort Fisher and taken prisoner. He died at Fort Columbus, Governors Island, New York, on March 10, 1865, and was buried at Oakdale Cemetery in Wilmington, North Carolina.