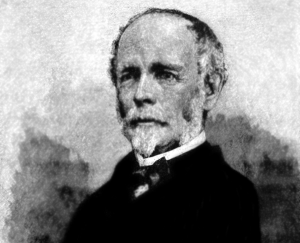 Joseph Eggleston Johnston, Confederate general, legislator, and author, son of Peter and Mary (Wood) Johnston, was born in Prince Edward County, Virginia, on February 3, 1807.He attended Abingdon Academy and the United States Military Academy at West Point, where he was graduated thirteenth in the class of 1829. During the Seminole campaign he was aide-de-camp to Winfield Scott from February 22 to May 21, 1836. Johnston resigned from the army on May 31, 1837, but was reappointed first lieutenant of Topographical Engineers on July 7, 1838, with a brevet captaincy for gallantry in the Seminole War. He took part in several major actions of the Mexican War, attaining rank of lieutenant colonel on April 9, 1847. Johnston was engineer on the Texas-United States boundary survey in 1841and was chief topographical engineer of the Department of Texas from 1848 to 1853. On June 28, 1860, Johnston was appointed brigadier and quartermaster general of the United States Army; he resigned his position on April 22, 1861, to enter the Confederate service, rising to the rank of full general. He was in joint command with Pierre G. T. Beauregard at First Manassas. Johnston commanded the Army of Northern Virginia. When he was wounded in the battle of Seven Pines, Robert E. Lee was given his command. Johnston commanded the Confederate Army of Tennessee at various times and in Georgia conducted a masterly retreat before William T. Sherman's Union Army. Johnston finally surrendered the Army of Tennessee to Sherman on April 26, 1865. From 1879 to 1881 Johnston represented Virginia in the House of the Forty-sixth Congress. He was United States commissioner of railroads from 1887 to 1891.Johnston published his Narrative of MilitaryOperations in 1874 and contributed articles to various periodicals and to R. U. Johnson and C. C. Buel's Battles and Leaders of the Civil War (1887–88). Johnston died at his home in Washington, D.C., on March 21, 1891, and was buried at Baltimore.