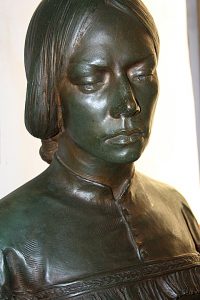 ALAVEZ, FRANCITA (?–?). Francita Alavez, the “Angel of Goliad,” accompanied Capt. Telesforo Alavez to Texas in March 1836. Her first name is variously given as Francita, Francisca, Panchita, or Pancheta, and her surname as Alavez, Alvárez, or Alevesco. Her real surname and place of birth are not known. Some writers claim that she was with Gen. José de Urrea's army at San Patricio, but this is highly unlikely since Captain Alavez came by ship from Matamoros to Copano Bay. Because Francita was with Captain Alavez in Texas, it was long assumed that she was his wife. However, research carried out in 1935 by Marjorie Rogers revealed that the army officer's legitimate wife was María Augustina de Pozo, who was abandoned by Alavez in 1834.