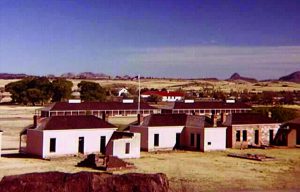 A key post in the defense system of western Texas, Fort Davis played a major role in the history of the Southwest. From 1854 until 1891, troops stationed at the post protected emigrants, freighters, mail coaches, and travelers on the San Antonio-El Paso Road. Today, Fort Davis is considered one of the best remaining examples of a frontier military post in the American Southwest. It is a vivid reminder of the significant role played by the military in the development of the western frontier. Named for Secretary of War Jefferson Davis, the fort was first garrisoned by Lieutenant Colonel Washington Seawell and six companies of the Eighth U.S. Infantry. The post was located in a box canyon near Limpia Creek on the eastern side of the Davis Mountains–where wood, water, and grass were plentiful. From 1854 to 1861 , troops of the Eighth Infantry spent much of their time in the field pursuing Comanches, Kiowas, and Apaches.

With the outbreak of the Civil War and Texas’s secession from the Union, the federal government evacuated Fort Davis. The fort was occupied by Confederate troops from the spring of 1861 until the summer of 1862, when Union forces again took possession. They quickly abandoned the post and Fort Davis lay deserted for the next five years. The original post consisted of primitive structures. (It was located west of the present day Officers’ Row. The foundations of several buildings from this earlier fort can still be seen today.) Not many of the fort’s structures remained in June 1867, when Lieutenant Colonel Wesley Merritt and four companies of the recently-organized Ninth U.S. Cavalry reoccupied Fort Davis. The building of a new post, just east of the original site, began immediately. By the end of 1869, a number of officers’ quarters, two enlisted men’s barracks, a guardhouse, temporary hospital, and storehouses had been erected. Construction continued through the 1880s. By then, Fort Davis had become a major installation with more than 100 structures, and quarters for more than 400 soldiers.

Fort Davis’s primary role of safeguarding the west Texas frontier against the Comanches and Apaches continued until 1881. Although the Comanches were defeated in the mid-1870s, the Apaches continued to make travel on the San Antonio-El Paso road dangerous. Soldiers from the post regularly patrolled the road and provided protection for wagon trains and mail coaches. The last major military campaign involving troops from Fort Davis occurred in 1880. In a series of engagements, units from Fort Davis and other posts, under the command of Colonel Benjamin Grierson, forced the Apaches and their leader Victorio into Mexico. There, Victorio and most of his followers were killed by Mexican soldiers. With the end of the Indian Wars in west Texas, garrison life at Fort Davis became more routine. Soldiers occasionally escorted railroad survey parties, repaired roads and telegraph lines, and pursued bandits. In June 1891, as a result of the army’s efforts to consolidate its frontier garrisons, Fort Davis was ordered abandoned, having “outlived its usefulness.