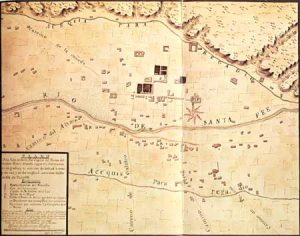 EL PASO DEL NORTE. As they approached the Rio Grande from the south, Spanish explorers in the colonial period viewed two mountain ranges rising out of the desert with a deep chasm between. This site they named El Paso del Norte (the Pass of the North), and it became the location of two future border cities, Ciudad Juárez on the south or right bank of the Rio Grande and El Paso, Texas, on the opposite side of the river. The arrival of the first Spanish expedition at the Pass of the North in 1581 marked the beginning of more than 400 years of history in the El Paso area. It was followed in 1598 by the colonizing expedition under Juan de Oñate. On April 30, 1598, in a ceremony at a site near present San Elizario, Oñate took formal possession of the entire territory drained by the Rio Grande and brought Spanish civilization to the Pass of the North.