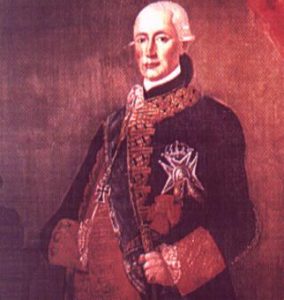 CROIX, TEODORO DE (1730–1792). Teodoro de Croix, soldier and government official in New Spain, was born in Prévoté castle near Lille, France, on June 20, 1730. He entered the Spanish army at age seventeen and was sent to Italy as an ensign of grenadiers of the Royal Guard. In 1750 he transferred to the Walloon Guards, bodyguards of the Bourbon kings of Spain. He was promoted to the rank of lieutenant in 1756 and was decorated in Flanders with the Cross of the Teutonic Order, which gave him the title of caballero. In 1760 Caballero de Croix was made a colonel in the Walloon Guards. In 1766, when his uncle Francisco, Marqués de Croix, went to New Spain as viceroy, Teodoro accompanied him as captain of the viceregal guard. The viceroy shortly appointed him governor of Acapulco. He became inspector of troops for New Spain with the rank of brigadier in December of that year and served in that capacity until 1770. The next year the Marqués de Croix ended his term as viceroy, and Teodoro sailed with him for Spain in company with José Bernardo de Gálvez Gallardo, who was retiring as inspector general. Poor sailing weather held up the voyage for five months in Havana. Thus Gálvez's young nephew, Bernardo de Gálvez, fresh from his first frontier command in Chihuahua, was able to overtake him and join the group for the rest of the voyage.