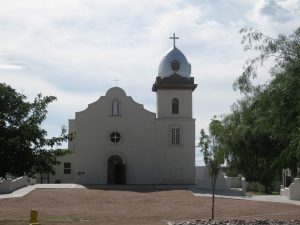 CORPUS CHRISTI DE LA ISLETA MISSION. Corpus Christi de la Isleta, the first mission and pueblo in Texas, was established by Antonio de Otermín and Fray Francisco de Ayetaqqv in 1682 and was maintained by Franciscans for Christianizing the Tigua Indians, who accompanied Otermín on his retreat to the El Paso area after his unsuccessful attempt to recover New Mexico in the winter of 1681–82. To the Tiguas, the mission church is known as San Antonio, after their patron saint, and they call the pueblo Ysleta del Sur. The site was also known by the Spaniards as Corpus Christi de la Isleta. The present church was constructed in 1851. Its distinctive silver-domed bell tower was added in 1897. In 1881 the Jesuits took over the church and renamed it Nuestra Señora del Monte Carmelo. Fire severely damaged the structure in 1907, but it was soon repaired.