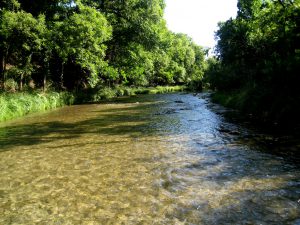 CONCHO RIVER. The Concho River rises in three branches known as the North Concho, the Middle Concho, and the South Concho. The North Concho, the main branch and a perennial stream, originates two miles north of the Glasscock county line in southern Howard County (at 31°07' N, 101°24' W) and flows southeast for eighty-eight miles across Glasscock, Sterling, Coke, and Tom Green counties to its confluence with the South and Middle Concho rivers, a mile north of Goodfellow Air Force Base in central Tom Green County (at 32°27' N, 100°27' W). The three forks become known as the Concho River at this juncture. San Angelo Dam, which became known as O. C. Fisher Dam (see O. C. FISHER LAKE) was completed on the North Concho in 1951. The Middle Concho rises in southern Sterling County (at 31°38' N, 101°13' W) and runs south and then east for sixty-four miles through Irion County to Twin Buttes Reservoir in western Tom Green County and then to its mouth on Lake Nasworthy (at 31°23' N, 100°31' W). The South Concho rises half a mile east of U.S. Highway 277 in central Schleicher County (at 30°51' N, 100°35' W) and flows north for thirty-six miles through Twin Buttes Reservoir, which was built on the branch in 1963, and Lake Nasworthy, which was completed in 1930, to its confluence with the North Concho River (at 31°27' N, 100°25' W). The consolidated Concho River flows east for fifty-eight miles across Tom Green and Concho counties to its mouth on the Colorado River, one-half mile west of the Coleman county line and one mile south of the Runnels county line in eastern Concho County (at 31°34' N, 99°43' W). Along its route it is joined by fifteen tributaries. Construction of the Simon W. Freeze Dam on the Colorado River, sixteen miles below the confluence of the Colorado and Concho, and the O. H. Ivie Reservoir (formerly Stacy Dam and Reservoir) has flooded the lower reaches of the Concho; water in the reservoir was impounded in 1990. The Concho River and its branches traverse a 246-mile path, crossing caliche beds and wash deposits on flat and rolling terrain, dissecting massive limestone, and ending on steep slopes and benches of limestone and marl. The surrounding soils are generally dark and calcareous stony clays and loams, dark brown to red-brown calcareous sandy clays and loams, and red-brown to gray-brown sandy and clay loams. Vegetation along the river consists primarily of water-tolerant hardwoods and conifers, grasses, scrub brush, creosote bush, cacti, oak, juniper, and mesquite.