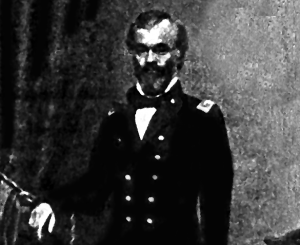 Heintzelman was born in Manheim, Pennsylvania, to Peter and Ann Elizabeth Grubb Heintzelman. He graduated from the United States Military Academy in 1826 and was commissioned a brevet second lieutenant in the 3rd U.S. Infantry, July 1, 1826, then in the 2nd U.S. Infantry in the and served on the Northern frontier at Fort Gratiot, Fort Mackinac, and Fort Brady. On March 4, 1833, he was promoted to first lieutenant and served on quartermaster's duty in Florida during the Second Seminole War. On July 7, 1838, he was appointed captain in the Quartermaster's Department, remaining in Florida until the close of the war in 1842. In 1847, during the Mexican-American War, he joined General Winfield Scott's army in Mexico, taking part in several engagements, for which he was appointed brevet major on October 9, 1847. In 1848-49 he accompanied his regiment around Cape Horn to California, and for several years served in California and the Arizona Territory.

In December 1851, Major Heintzelman led the Yuma Expedition from the post of San Diego to put down the Yuma uprising, called the Yuma War. His expedition established Fort Yuma and peace was made in October, 1852. He received the brevet of lieutenant colonel for his conduct in the campaign against the Yuma Indians and on March 3, 1855, he was promoted to major of the 1st U.S. Infantry and served with that regiment on the Texas frontier.In 1859, during the First Cortina War in Texas, he was largely responsible for the defeat of Juan Cortina's forces.

Heintzelman was the first president of the Sonora Exploring and Mining Company which established the Cerro Colorado, Arizona mining town in southern Arizona. The town became famous during the American Civil War for the massacre of mine employees by Mexican outlaws and for buried treasure.