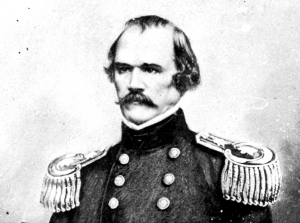 In April 1834, Johnston took up farming in Texas, but enlisted as a private in the Texas Army during the Texas War of Independence against the Republic of Mexico in 1836. One month later, Johnston was promoted to major and the position of aide-de-camp to General Sam Houston. He was named Adjutant General as a colonel in the Republic of Texas Army on August 5, 1836. On January 31, 1837, he became senior brigadier general in command of the Texas Army.

On February 7, 1837, he fought in a duel with Texas Brig. Gen. Felix Huston, challenging each other for the command of the Texas Army; Johnston refused to fire on Huston and lost the position after he was wounded in the pelvis. The second president of the Republic of Texas, Mirabeau B. Lamar, appointed him Secretary of War on December 22, 1838. Johnston was to provide the defense of the Texas border against Mexican invasion, and in 1839 conducted a campaign against Indians in northern Texas. In February 1840, he resigned and returned to Kentucky, where he married Eliza Griffin in 1843. They settled on a large plantation he named China Grove in Brazoria County, Texas.