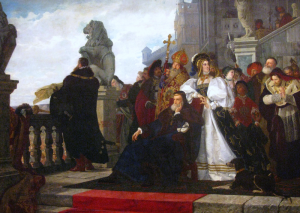 CHICKEN WAR. As the Texas manifestation of the War of the Quadruple Alliance in Europe, the Chicken War caused abandonment of the Spanish Franciscan missions in eastern Texas in 1719. With news that Spain and France were on opposing sides in the conflict, Lt. Philippe Blondel at the French post of Natchitoches, Louisiana, struck in June 1719 at the nearest Spanish target: San Miguel de Linares de los Adaes Mission, at a site near that of present Robeline, Louisiana. Finding only a lay brother and one soldier at the mission, Blondel and his detail of seven gathered up the sacred vestments and provisions, then raided the henhouse. As he mounted his horse after tying the chickens to the pommel of his saddle, the chickens flapped their wings, the horse reared, and the lieutenant was spilled in the dirt. His companions rushed to his aid. Taking advantage of the confusion, the lay brother dashed off into the woods.

After reaching Nuestra Señora de los Dolores Mission (at the site of present-day San Augustine, Texas) on June 22, 1719, the brother informed Fray Antonio Margil de Jesús of what he had been told by Blondel: Pensacola had been captured by the French, and a hundred soldiers were on their way from Mobile with the East Texas settlements as their objective. Lacking confidence in the Spaniards' relationship with the Indians, Father Margil viewed retreat as the only alternative. He packed his vestments and headed for Nuestra Señora de la Purísima Concepción Mission (in the area of present Nacogdoches County) to spread the alarm.