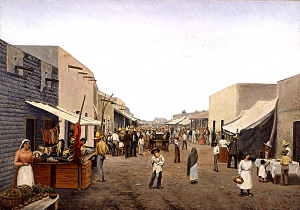 BENAVIDES, TEXAS. Benavides is at the intersection of State highways 339 and 359 and Farm Road 2295, on Las Animas Creek and the Texas Mexican Railway eighteen miles southwest of San Diego in Duval County. It is the third most populous town in the county. The community is named after Plácido Benavides, whose uncle, also named Plácido Benavides, was called by one writer “the 'Paul Revere' of South Texas.” The younger Plácido Benavides was a Confederate Army veteran, who in the 1870s built his Rancho Palo Alto into one of the biggest ranches in Duval County. In 1880 the county asked his permission to locate a railroad depot on his property. He agreed and then in 1881 donated eighty acres to the community that was growing up around the railroad station. A post office was established in Benavides in 1881 with Jacob William Toklas as postmaster. By far the most significant event of the decade, however, was the arrival in 1882 of a twenty-two-year-old former ranchhand and schoolteacher named Archer Parr, who later became the boss of Duval County and founded the most notorious political dynasty in Texas (see BOSS RULE).