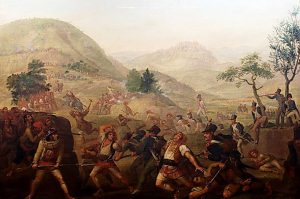 MEDINA, BATTLE OF. The battle of Medina was fought on August 18, 1813, between the republican forces of the Gutiérrez-Magee expedition under Gen. José Álvarez de Toledo y Dubois and a Spanish royalist army under Gen. Joaquín de Arredondo. This bloodiest battle ever fought on Texas soil took place twenty miles south of San Antonio in a sandy oak forest region then called el encinal de Medina. Occurring during a very confused and turbulent period of world history, the battle of Medina affected the destinies of Spain, Mexico, the United States, England, and France. Mexico and Latin America were in revolt against Spain, whose king was Joseph Bonaparte, brother of Napoleon, who was on a rampage in Europe, and the United States was at war with England, later to be called the War of 1812. In this cauldron of world events, José Bernardo Gutiérrez de Lara and Augustus William Magee,qqv abetted by the United States, organized an expedition to wrest Texas from Spain. Adopting a “Green Flag” for a banner, their Republican Army of the North crossed from the Neutral Ground in Louisiana into Texas on August 7, 1812, and soon captured Nacogdoches, Trinidad de Salcedo, La Bahía, where Magee died, and San Antonio, where a declaration of independence for the State of Texas under the Republic of Mexico was proclaimed on April 6, 1813. This, however, was short-lived, for Joaquín de Arredondo, commandant-general of the Provincias Internas, organized an army of 1,830 men and marched them early in August from Laredo toward San Antonio to quell the rebellion. In the meantime, Toledo deposed Gutiérrez and became the new commander of the republicans on August 4.