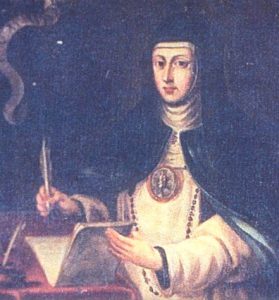 AGREDA, MARÍA DE JESÚS DE (1602–1665). María de Jesús de Agreda (the Lady in Blue) was born in the Spanish village of Agreda near the border of Aragon and Navarre in April of 1602, the eldest daughter of Francisco Coronel and Catalina of Arana. In her youth María, baptized María Coronel, demonstrated unusual piety and remarkable memory. At the age of sixteen, she convinced her father that he should convert the family castle into a convent for Franciscan nuns. She took religious vows on February 2, 1620, and the name María de Jesús. The new order soon expanded beyond the confines of the castle and moved to the convent of the Immaculate Conception in Agreda. The nuns’ habit was colored Franciscan brown (pardo) with an outer cloak of coarse blue cloth.