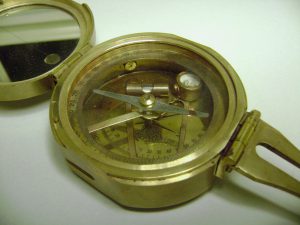 Frequently, in addition to the rose or sometimes instead of it, angle markings in degrees are shown on the compass. North corresponds to zero degrees, and the angles increase clockwise, so east is 90 degrees, south is 180, and west is 270. These numbers allow the compass to show azimuths or bearings