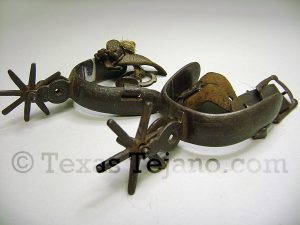 Spurs are usually held on by a leather or leather-like strap, called a spur strap that goes over the arch of the foot and under the sole in front of the boot heel. Some western designs have a leather strap that goes only over the top, with a heel chain or a rubber “tie down” instead of a strap under the boot. There are also styles with no straps where the heel band simply is very tight and slips on wedged between the sole and heel of the boot. Some spur designs have a slot for running the spur strap through; others have “buttons,” sometimes on the heel band itself and sometimes attached to the heel band by hinges that allow a strap with buttonholes to be attached.
When used in military ranks, senior officers, and officers of all ranks in cavalry and other formerly mounted units of some armies, wear a form of spur in certain orders of dress which is known as the box spur, having no spur strap but a long metal prong opposite the neck, extending between the arms of the heel band, which is inserted into a specially fitted recess or “box” in the base of the boot heel.