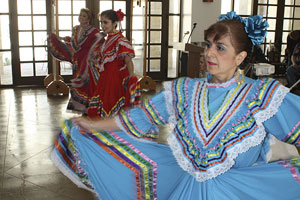 275th Anniversary of Tejanos at the Mission de Valero

175th Anniversary of the Battle of the Alamo

On March the 5th 2011, we will all celebrate the 175th Anniversary of the Battle of the Alamo and honor the defenders. Yet, the Tejano Heroes of the Alamo and their 275
years of the founding of Texas has largely gone unnoticed and unsung. Tejanos are descendants of the first Spanish, Mexican and indigenous families on the early Texas frontier.

For over one hundred and fifty years prior to the Battle, Tejanos built the first roads, had their own capital, ranching economy, architecture and gave us the rich cultural that defines who we are today. This year, as we acknowledge the anniversary of the Battle, lets us also celebrate the role Tejanos played in the revolution, independence and development of Texas.

On March 5, 2011, an open house will be held at the San Fernando City Centre from 12:00pm to 5:00pm. Activities will include a heritage luncheon with keynote speaker, Tejano exhibits, artifacts displays, cultural performances and Tejano re-enactors. For more information call Vincent Tavera at 892-0136.