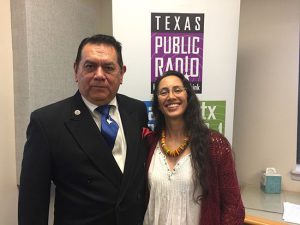 TPR Interview on the Campo Santo

Texas Tejano.com is a fifteen-year-old research, publishing, marketing, and advocacy firm dedicated to championing Tejano legacy and heritage. All our efforts have been to contribute to the awareness and education of students and the public to the true story of the lives and roles that Tejanos played in the development of our state and the American Southwest. Further, our advocacy efforts have led to working with many local, state, and national government bodies to include the untold story of Tejanos. As a leading advocate of Tejano heritage and legacy, we are actively involved in resolving issues that affect the heritage of all Texans.

Currently, along with the leadership group consisting of Los Bexarenos, American Indians in Texas at the Spanish Colonial Missions, the Canary Islands Descendants Association, and others, we’re involved in an effort to commemorate the desecrated Campo Santo Cemetery. As you may know, Santa Rosa Hospital was built over the historical cemetery, and recent expansion has revealed the remains of at least 70 ancestral interred bodies. Early on, the City of San Antonio also built streets and a public park over the same holy land.

In our role of facilitating and organizing the descendant groups, working with the hospital and the City of San Antonio, we have advocated for this important issue and provided outreach to community leaders and the media. As such, on October 4, 2017, our president, Mr. Rudi R. Rodriguez was interviewed by Ms. Norma Martinez of Texas Public Radio on the Campo Santo.

The interview covered the historical background of the Campo Santo beginning in 1808, as well as the current issue wherein Santa Rosa Hospital uncovered remains of interred bodies. It also talks about ongoing discussions with Santa Rosa Hospital, the City of San Antonio, and how these organizations are working together to commemorate and preserve the Campo Santo. The interview will air on “Fronteras” on October 20, 2017 at 12:00 pm on KSTX 89.1, and again on October 22, 2017, at 9 pm. If you have any questions, please visit texastejano.com or call us at (210) 673-3584.