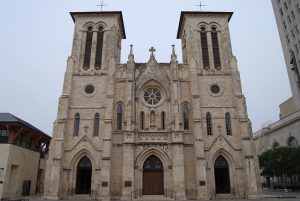 SAN FERNANDO CATHEDRAL. The site for the Church of San Fernando was selected on July 2, 1731, when Juan Antonio Pérez de Almazán, captain of the Presidio of San Antonio, laid out a central square for the villa of San Fernando de Béxar, as San Antonio was then called. He followed the instructions by the Spanish government for the newly arrived Canary Islanders. The church was to be located on the west side of the square, which may still be considered the center of San Antonio. Before and during the construction of the town's parish church, the fifty-five immigrants and the presidial families attended services at the presidial chapel or at San Antonio de Valero Mission. Although information is contradictory, the cornerstone for the first attempt to build a stone church was laid most likely on May 11, 1738. In 1748 the viceroy approved a donation of 12,000 pesos to complete the church. With funds secured, two artisans from San Luis Potosí, Gerónimo de Ibarra (a master stonemason) and Felipe de Santiago (a stonecutter), were hired to continue the project. Ibarra razed the earlier construction and enlarged the dimensions of the building. He completed the church in 1755. Joining Old World and New World saints, the congregation chose Our Lady of Candlemas and Nuestra Señora de Guadalupe as patrons in addition to the town's official patron, San Fernando, or King Fernando III of Spain, who was canonized in 1671.