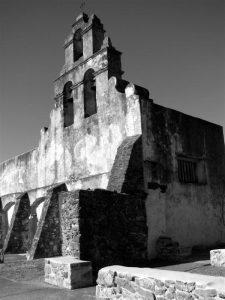 EL ORCOQUISAC. El Orcoquisac, a Spanish outpost (1765–71), was located north of the site of present Wallisville and east of the Trinity River in what is now northern Chambers County. The settlement consisted of San Augustín de Ahumada Presidio and Nuestra Señora de la Luz Mission. The presence of Indians, primarily the Bidais and Orcoquizas, lured French traders into the surrounding region as early as the 1720s. Persistent rumors of Frenchmen operating out of the lower Trinity reached the ears of Governor Jacinto de Barrios y Jáuregui at Los Adaes. Alarmed over the French presence and the threat it posed to his own illegal trade monopoly with the Indians, the governor in 1754 dispatched Lt. Marcos Ruiz and a force of twenty-five soldiers to arrest the Frenchmen reputed to be operating near the mouth of the Trinity. Ruiz, after gaining the support of the Bidai and Orcoquiza villages nearby, arrested Joseph Blancpain of Natchitoches, four associates, and two blacks on October 10, 1754. Blancpain's log trading post was dismantled, and the lumber was given to the Orcoquizas. The prisoners were marched to Mexico City, where Blancpain died on February 6, 1756. After considerable discussion, Barrios decided to establish an outpost on the site of the French trading post. Ruiz marched to the Trinity with thirty-one men, 151 horses, guns, swords, saddles, supplies, and other military equipment in May 1756. He took possession of the site eleven days later. The presidio was named San Augustín de Ahumada in honor of the viceroy. Temporary structures were completed by July 12, 1756.