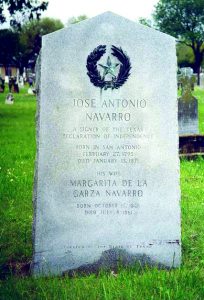 José Antonio Navarro, a leading Mexican participant in the Texas Revolution, son of María Josefa (Ruiz) and Ángel Navarro, was born at San Antonio de Béxar on February 27, 1795. His father was a native of Corsica, and his mother was descended from a noble Spanish family. Navarro's early education was rudimentary, though he later read law in San Antonio and was licensed to practice. He was compelled to flee to the United States because of his support of the Gutiérrez-Magee expedition in 1813 but returned to Texas in 1816. A developing friendship with Stephen F. Austin served to deepen his interest in Texas colonization. Before Texas independence Navarro was elected to both the Coahuila and Texas state legislature and to the federal congress at Mexico City. He supported Texas statehood in 1835 and embraced the idea of independence the following year. Along with his uncle, José Francisco Ruiz, and Lorenzo de Zavala,qqv he became one of the three Mexican signers of the Texas Declaration of Independence. Upon his election to the Texas Congress as a representative from Bexar, Navarro sought to advance the rights of Tejanos, whom many Anglo-Texans held in contempt after the Texas Revolution. He also generally endorsed the policies of President Mirabeau B. Lamar while opposing those of Sam Houston. As a supporter of Lamar, Navarro was selected as a commissioner to accompany the foolishly conceived Santa Fe expeditionqv. Decimated by Indian attacks and suffering from hunger and thirst, those who survived the march from Austin tamely capitulated outside the gates of Santa Fe. After imprisonment under brutal conditions at Veracruz for fourteen months, Navarro escaped and returned to Texas.