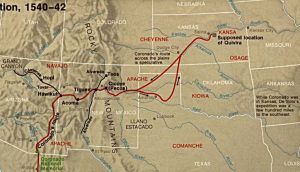 CORONADO EXPEDITION. In 1536 Álvar Núñez Cabeza de Vaca took to Mexico City a report of people who lived in large houses in the Seven Cities of Cíbola, in the northern part of New Spain. To verify Cabeza de Vaca's statements, Viceroy Antonio de Mendoza sent Marcos de Niza to the north in the spring of 1539. After Niza's confirmation of the report, Mendoza, on January 6, 1540, appointed Francisco Vázquez de Coronado to lead an expedition to conquer the area. That expedition, gathered at Compostela for Mendoza's review in February 1540, included 1,000 men, 1,500 horses and mules, and cattle and sheep for the expedition commissary. Two vessels under command of Hernado de Alarcón were sent up the coast to support the land forces.