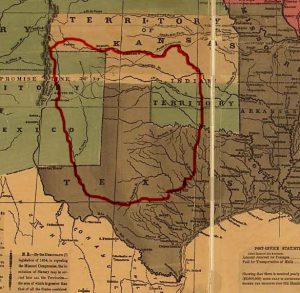 CIBOLEROS. The ciboleros were Mexican buffalo hunters who operated on the Llano Estacado for nearly two centuries. Their name was derived from the Spanish cíbolo, the common term for buffalo. Although they were often associated with the Comancheros (see COMANCHERO) they were actually a distinct group whose primary objective was to hunt the shaggy bison for meat, hides, and sport. Like the Indians, the ciboleros considered the thrill of the chase as much a part of the hunt as the kill. Most of them operated out of Taos, Santa Fe, or the El Paso area, and they were an important factor in the eventual demise of the buffalo herds on the southern plains.

Since pre-Columbian times sedentary Pueblo Indians from the upper Rio Grande had ventured onto the plains to supplement their vegetable diet with buffalo meat whenever relations with plains tribes permitted. The acquisition of horses from the Spaniards made these annual journeys faster, easier, and more successful. Early Spanish expeditions into West Texas, beginning with that of Vicente de Zaldívar in 1598, hunted and even tried to capture and domesticate buffalo. Though the Pueblos and Spanish colonists of New Mexico obtained most of their meat and hides through barter with the plains nomads, they soon mastered many buffalo-hunting techniques. By the late seventeenth century ciboleros had begun to venture out in force onto the Llano Estacado.